On Saturday October 7, the Doornroosje in Nijmegen will host the second edition of the Soulcrusher festival. The line-up is absolutely stellar, even more so given that it is a one-day event and not a weekend one. After the schedule below, we highlight two bands from each stage (truth be told, the whole bill is pretty good), leaving out the obvious case of Mayhem performing «De Mysteriis Dom Sathanas» because it’s an obvious one. 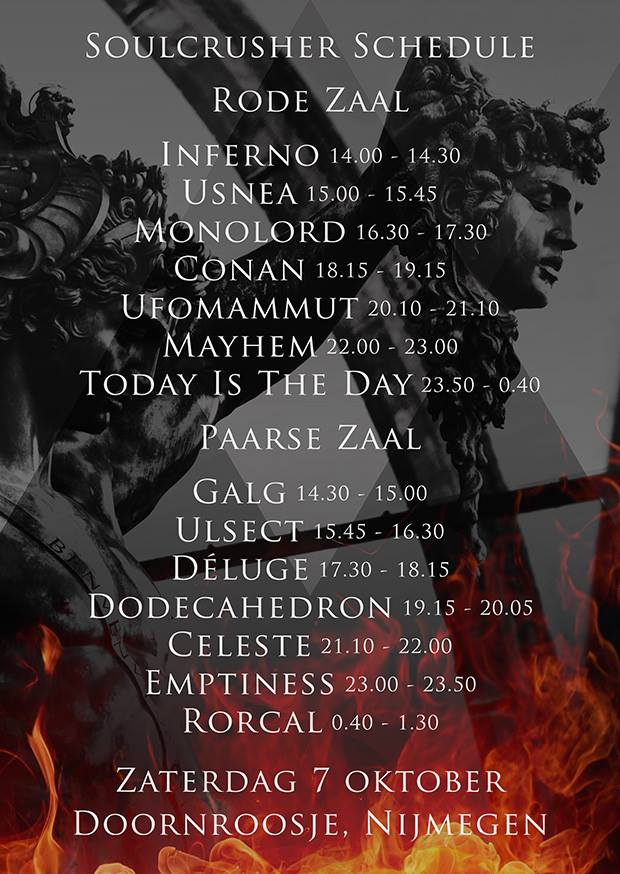 Today Is The Day

If we are perfectly honest, we would have Today Is The Day atop of this list even if Mayhem was included. It doesn’t matter at all that no new record has been put out since the time we saw them in The Netherlands, blowing away all those in attendance at the De Helling in Utrecht during 2015’s Le Guess Who?. Its the twentieth anniversary of «Temple of the Morning Star» and that’s what this European tour is all about. Even if it was a regular performance, they’d be in this place with Steve Austin’s particular blend of noise rock, metal and all in between. Next Saturday, though, it’ll be a rougher affair, since the clear, focused angular riffing of a «Pain Is a Warning» was in a more embryonic stage by 1997 and «Temple of the Morning Star» is a reflection of that rawness.

Further reading: Tombs‘ Mike Hill talked to Steve Austin in a look back at «Temple of the Morning Star» in this Noisey piece.

If «8» hadn’t just been released, we would have gone for Usnea’s sci-fi worshipping doom. However, the last record of the Italian trio might very well be their best yet, showcasing a much more focused in-your-face version of the psychedelic trip that started going full-tilt around «Eve». The doom and the riffs are back, the psych remains, and we can’t wait to experience it live.

This was pretty much a toss-up with Rorcal, as the Swiss band tends to put on ferocious performances, but the curiosity of seeing how well Dodecahedron fares live with new vocalist W. Van Der Voort from Ggu:ll just hedges it in favour of the Dutch collective. Their latest offering, «kwintessens», is an absolute maelstrom of dissonant black metal. If half of the insanity and complex structures present there can be transposed to the stage with the fire and fury they demand, we’re in for a hell of a concert.

We began with the last band playing the main stage, we end with the first of the secondary one, which also happens to be the sort of hometown band (two out of three ain’t bad). Most importantly, their performances are often extremely abrasive in the best of senses (the one opening for Altar Of Plagues a few years ago was particularly memorable). It is important to note that listening to their already released material doesn’t quite paint the full picture, since their performances in the last couple of years have mostly been around still unreleased material. There, the trio displays a more varied undertaking of their bleakness, even touching upon some blackened krautrock in one song.

Tickets for Soulcrusher II are still available and can be acquired through this location.