We’ve got news regarding the upcoming Cunninlynguists European tour, GNOD unleashing a mammoth of a track from their upcoming album, as well as a couple of updates regarding dälek, Morbosidad, and SQRM. 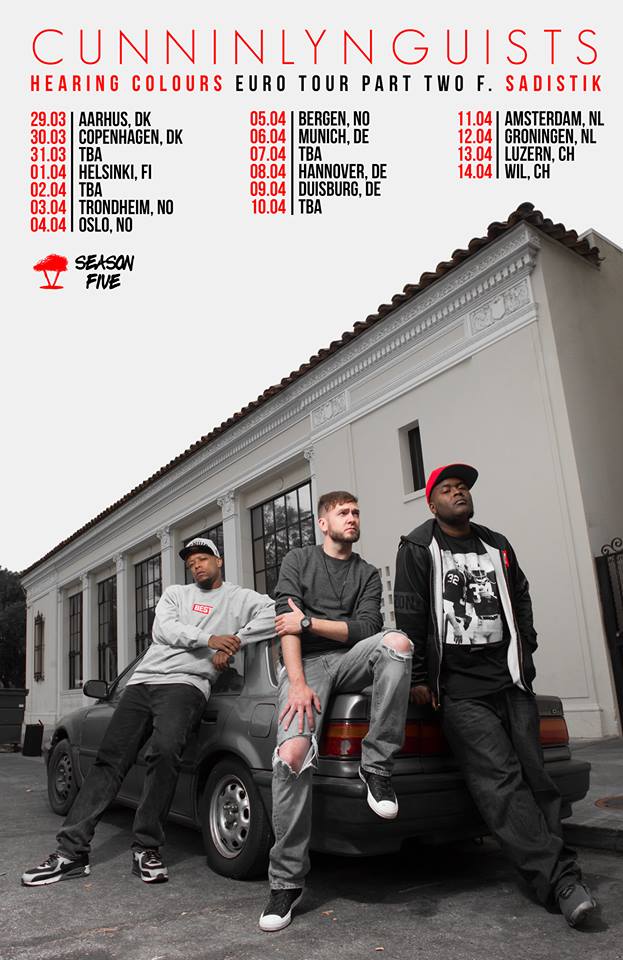 As we stand reeling from the announcement that dälek is about to tour Europe in a couple of months, it’s a good time to note that there’s another fantastic hip-hop collective just about to embark on a little tour through the old continent, none other than Cunninlynguists. The currently announced dates can be seen in the tour poster above. For the second part of the Hearing Colours European tour, which will take place in the first two weeks of April (plus a couple of dates in March), the trio will be joined by Sadistik.

The connection between the Lexington trio and the Seattle rapper dates all the way back to the track «Kill The King» from Sadistik’s 2013 «Flowers for My Father», produced by Kno and featuring Deacon the Villain on vocals. Two years later, Kno and Sadistik teamed up for the «Phantom Limbs» EP, released by Dirty Decibels Records and whose single «To Be In Love» you can check here. As for the more recent past, both Cunninlynguists and Sadistik released full-lenght records last year, «Rose Azura Njano» and «Altars» respectively. As the tour approaches, now it’s definitely a good time to re-discover those records, both of which can be streamed below.

Tickets for shows of Cunninlynguists with Sadistik as support can be acquired in this location.

As The Quietus’ John Doran puts it “prepare to melt your face off.” Following-up on last year’s acclaimed album «Just Say No To The Psycho Right-Wing Capitalist Fascist Industrial Death Machine» and collaboration with Radar Man From The Moon «Temple Of BBV», GNOD is now set to release another full-length, entitled «Chapel Perilous». Below, you can listen to «Chapel Perilous»’s first track, «Donovan’s Daughter’s». Quick warning: the last five minutes might leave you laying in foetal position for a while.

The upcoming record is titled after a concept first appearing in Robert Anton Wilson’s «Cosmic Trigger». Now, it must be said that to this author, a lot of Wilson’s work sounds like crackpot – but hey, if it inspires a song as good as «Donovan’s Daughter’s», at least something good came out of it (which is the exact way I look at 16 Horsepower‘s material – good songs, shit sources). Tangential ramblings out of the way, it is best to put the concept in context by quoting the press release for the record, which states that “Chapel Perilous exists whereby the supernatural converges with the everyday – whatever one’s definition of reality, this psychological realm serves to prove it endlessly subjective and changeable” and that despite its authorship, there are “few musical outfits in the here and now more worthy of carrying on its tradition than Gnod.” Amongst other things, because of their ever shifting nature, which leaves “any tag or bracket one attempts to place on them utterly redundant,” a statement which stands as obviously true for anyone that has tried following the prolific British collective over the years.

«Chapel Perilous» is set for release via Rocket Recordings on May 4.

Yesterday, we wrote about the upcoming European tour of dälek. One noticeable thing about their tour poster is that it only features Will Brooks and Mikey Manteca. We reached out to the band to ask whether or not they would be touring as a duo and they confirmed that, with some exceptions, they would indeed be performing as a duo. As we noted yesterday, Swedish free-jazz saxophonist Mats Gustafsson is set to join dälek for three performances, so at least some (if not all) of those exceptions have already been announced.

After we noted that the title track of Morbosidad‘s «Corona de Epidemia» was out, Decibel put the whole thing for stream at this location. Below, recall the band’s previous EP «Tortura», which is the closer in their discography to the sound of «Corona de Epidemia».

Youth Attack has made available on their bandcamp two releases from purveyors of confrontational hardcore SQRM, namely, 2009’s demo «Fuck To Survive» as well as their only full-length, «Rodeo». You can stream them both below and acquire them digitally at the label’s bandcamp. An interview with the band dating back to 2011 can be found here.

One thought on “News round-up: Cunninlynguists, Gnod, and some quick updates”