In southern countries, a sunny day is just a sunny day and not a cause for celebration. That’s not the case in The Netherlands, as anyone that has looked at a Dutch park in a sunny day will tell you. Yesterday, this celebratory mood extended to Bloodshed’s organisers and they decided to drop an announcement with the remaining “main festival” line-up for this year’s edition (the phrasing used is suggestive that there might be a few more acts to be announced, either for the Afterbleed or for the new stage). This follows the earlier confirmation of Tragedy as the first headliner and of bands such as -(16)-, Enemy Soil, Primitive Man, Spectral Voice, and Triumvir Foul. This final batch of confirmations includes the festival’s second headliner, Agoraphobic Nosebleed, who therefore return to the country after a thunderous passage by Tilburg during the 2016 Netherlands Deathfest.

Another big confirmation is that Tragedy’s Todd Burdette is pulling double duty in Eindhoven, as he is not only set to perform as one of the headliners but also alongside Mournful Congregation‘s Tim Call as Nightfell in what is set to be the duo’s first ever concert in European soil.

The final piece of good news is that, following Svartvit’s fantastic performance in the last edition, the festival will feature a noise stage this year, to which Dutch artists A Million Squeeks Will Do You No Harm, LSD Mossel, and DMDN have all been added. To check the remainder of the newly confirmed acts, check the announcement or the poster below. 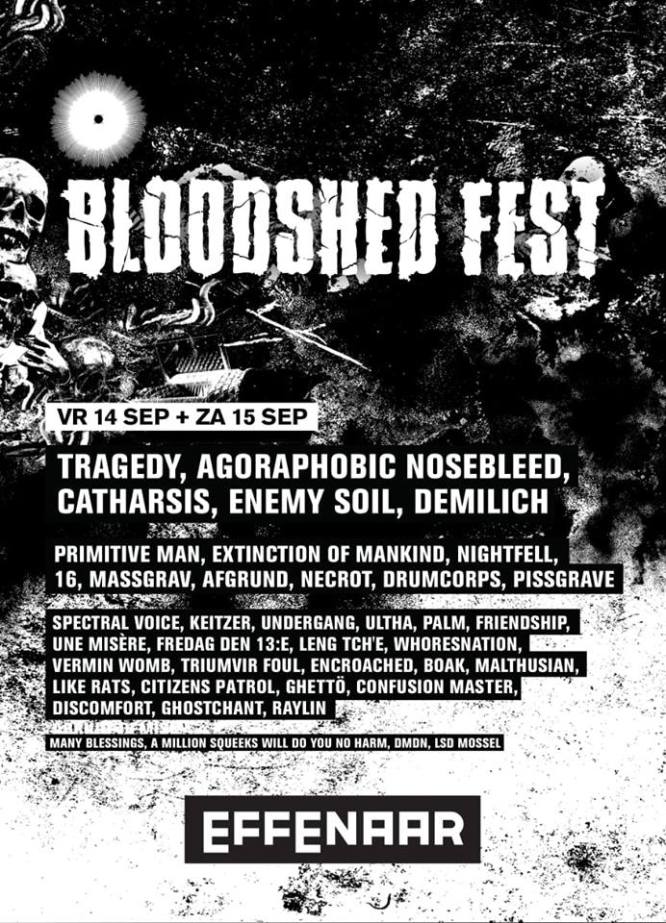 The 2018 edition of Bloodshed Festival will take place on the 14th and 15th of September at the Effenaar in Eindhoven, The Netherlands.